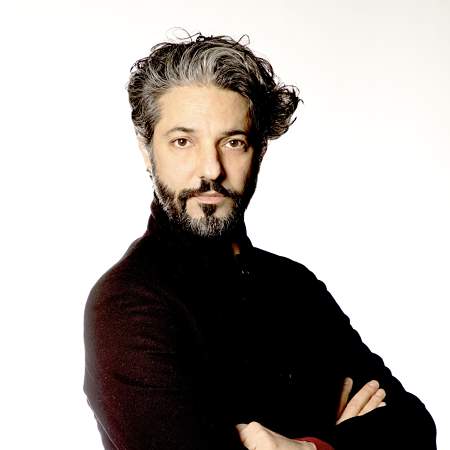 Shahrokh Moshkin Ghalam graduated from the University of Paris VIII with a degree in the History of Art and Theatre. He specializes in Middle Eastern folklore and mystical dance and has a deep interest in Indian, Indonesian and Flamenco dances. Shahrokh joined the renowned Théâtre du Soleil in 1991 where he played lead roles in Ariane Mnouchkine’s productions of “Tartuffe” “La ville parjure” and “Les Atrides”. In 1997 he established the Nakissa Dance Company and created “A Persian Night’s Dream,” the “Route of the Orient,” “Nostalgia or Ghassedak,” the “Seven Pavilions of Love” (Haft Peykar,) “Omar Khayam,” “Les danses mythologiques,” “Mani the Buddha of Light,” “Rumi le brûlé,“ and coming soon, “Hafez”.
He has appeared in Shakespeare’s “Twelfth Night” directed by Christophe Rauck; “Romeo and Juliette,” directed by Lionel Briand; “The Baccantes” by Euripides, directed by Usevio Lazaro; “A Soldier’s Tale” by Stravinsky; “La diva d’Auschwitz,” directed by Antoine Campo; “A Streetcar Named Desire” by Tennessee Williams, directed by Phillip Adrian; and “Kidnapping at the Seraglio” by Mozart, directed by Jérome Deschamps and Macha Makeïef. His directorial credits include Shakespeare’s Venus and Adonis in Persian (“Zohreh va Manouchehr”); “Mardha va Chiz” (Men and the Thing); and “Kafané Siah” (Black Shroud). Since January 2005 he has been an official member of the “Comédie Fançaise” with appearances in “Le Sicilien” by Lully-Molière, directed by Jean-Marie Villégier; “La Maison des Morts” by Philippe Minyana, directed by Robert Cantarella; and “Pedro et le Commandeur” by Felix Lope de Vega, directed by Omar Porras.

Shahrokh is the Artistic Director of Nakissa Art Company.

Shahrokh Moshkin Ghalam’s company was founded in 1997 and has been performing in different domains such as dance, theatre, poetry reading ,costume design and photo exhibition. Nakissa Art is an international art company with dancers and actors from Iran and other countries and has performances all over the world.
The work of Nakissa Art is an association between the classical technique and contemporary spirit, which is very well suited to retelling classic tales.

The Art of Improvised Iranian Dance and Music

The Art of Improvised Iranian Dance and Music