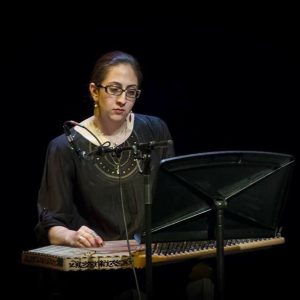 Sanaz Nakhjavani, Kanun player, graduated from Tehran Conservatory of music( Honarestan Musighi)in Piano and Kanun. Sanaz has a Bachelor of music from Soureh higher Education Institute in Tehran and a Bachelor of Spanish Language and Literature from Allameh Tabatabai University. In 2008 she moved to Istanbul, turkey in order to improve her kanun performance skills. She benefited from the master of kanun Ahmet Meter. She finished her MA in Turkish music from Istanbul Technical University, Conservatory of Turkish music. In 2010 she started a PhD program in ethnomusicology at the same University, which is still in process. She has performed with different ensembles since 1998 in Tehran and continued taking part in concerts while she was in Istanbul. There she got the chance of experiencing different ensembles such as Mixta; Spanish music with Turkish instruments and free improvisation ensemble and duet of soprano, electronics and kanun. She established Rehavi ensemble while she was in Istanbul, which is a combination of Turkish and Iranian classical music. In 2014 Mahoor Publication in Tehran released an album of this ensemble. She has also performed in other albums; the significant ones are Showqnameh (2012) and from Ray to Roum (2013). She was a piano instructor at Pars music institute in Tehran and kanun and piano instructor at Besiktas Muzik Evi in Istanbul. Currently, she is teaching Piano at Ontario Conservatory of Music.